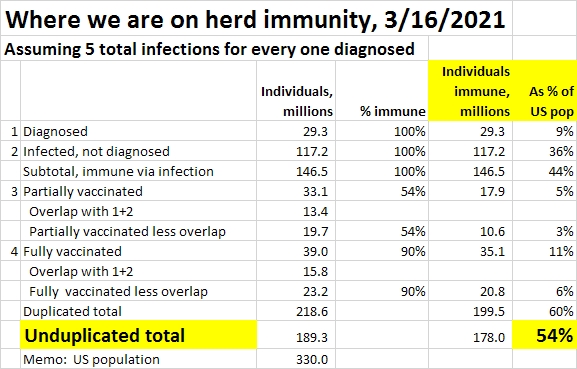 Let me start off by stating something that I think is obvious, but doesn’t get said often enough.  Even if there is a “fourth wave” of COVID-19 in the U.S., it can’t possibly be as bad as the third wave.

Some may take issue with that.  You might hear that you can’t be sure that people who’ve had it are actually immune.  And that immunity fades after a while.  But the fact is, a) documented cases of re-infection in the U.S. are incredibly rare (news-worthy rare), and b) the bulk of people who have had COVID-19 had it recently enough that immunity should not have faded yet.  Some fraction of the already-recovered population may not, in fact, be be immune to the prevalent strains of COVID-19 in the U.S.,  but that fraction is apt to be negligibly small.

And then there’s vaccination.  As of today, per the CDC’s COVID-19 dashboard, well over one-quarter of all U.S. adults have been vaccinated (at least one dose), and roughly two-thirds of the elderly (65+) population has been vaccinated.

The one “hotspot” (really, warm spot) on the radar screen at the moment — Michigan — appears to be driven by high school students.  That’s one of the last  untapped reservoirs of population that lacks immunity and that is in a close-quarters situation where disease spread is likely.

And I think that’s indicative of where we stand.  We’re now at the point of discovering sub-segments of the population that haven’t yet been strongly hit by COVID-19. Not because the virus necessarily seeks those out.  But because those little sub-segments now stand out, given that COVID-19 is subsiding from the general population.  The current increase in Michigan would have gone completely unnoticed three months ago.

We passed the worst of it at the end of 2020.  We may yet see another “wave”, but it’ll be more of a ripple compared to the third wave.

And on the flip side of that, we’re probably never going to be rid of COVID-19 completely.  It’s just a question of beating it back to the point to where the risks are tolerable.  We’re well on our way to doing that.  We just have to keep our act together long enough for that to happen.

There’s no particular trend in the U.S.

The recent increases in Minnesota might have been an artifact of data reporting.

There prevalence of the U.K. variant continues to grow, but (arguably) this is more-than-offset by vaccinations.

And that’s about it. The regional pictures are unchanged from yesterday:  NY is flat, FL is trending down, CA is trending down sharply.  The sole significant exception is Minnesota in the Midwest, where some part of what looked like an increase was just another one of those data-reporting “speed bumps” (circled below).  They added a bunch of old cases into their data on 3/9/2021, and that’s now working its way back out of the seven-day moving average.  And so, for whatever reason, Michigan’s uptick, concentrated among high school age and young adults, may be unique to Michigan. Data sourced from the Helix® COVID-19 Surveillance Dashboard. Accessed at Helix.com/covid19db on 3/17/2021.

FWIW, I remain convinced that we’re vaccinating at a pace that is just fast enough to prevent a fourth wave from these new variants.  That’s laid out in Post #1051.  (And, I should note, I’m not the only one to have done that calculation and reached that conclusion, as noted in this news reporting.)