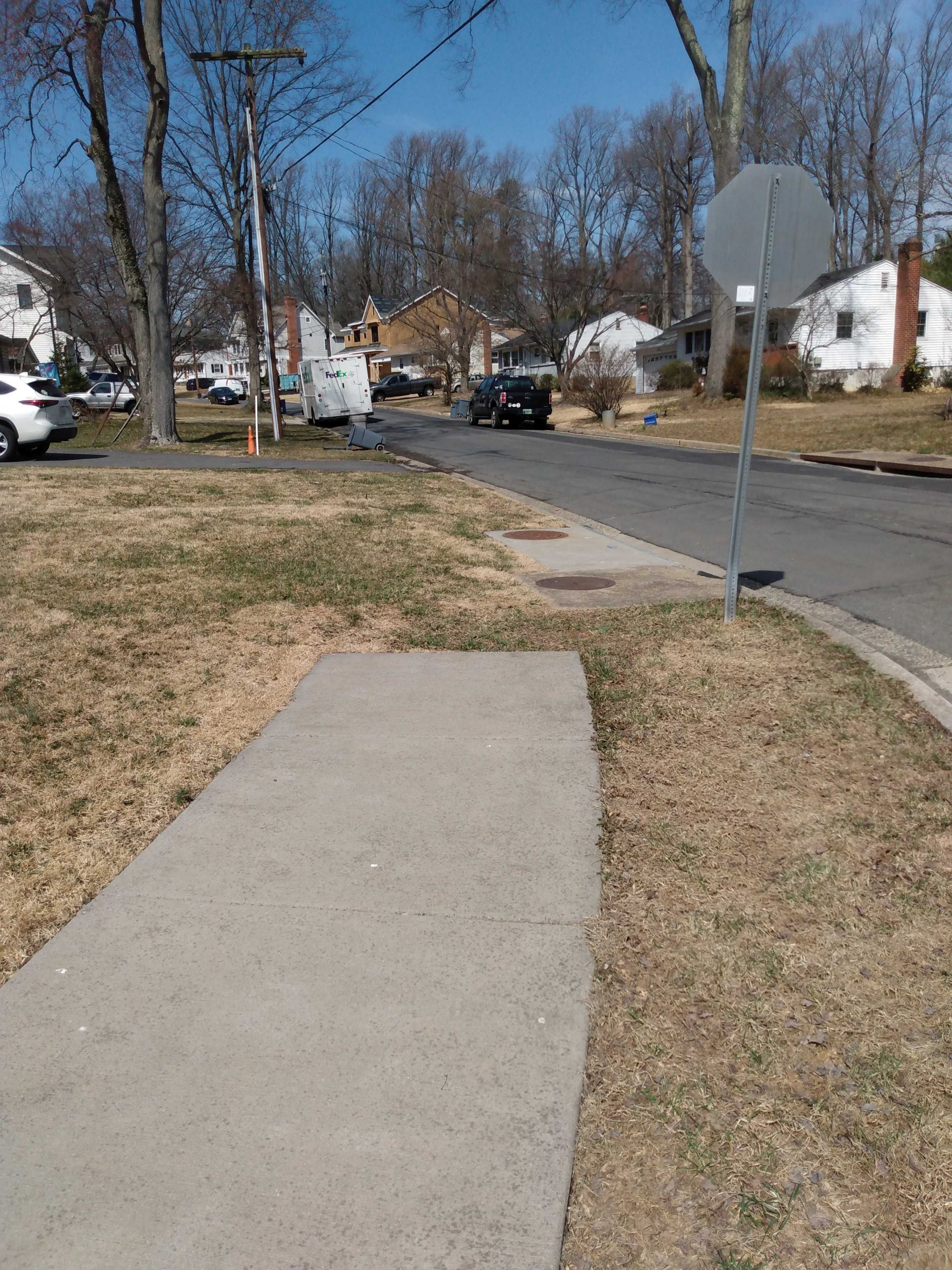 This post is a little calculation regarding the fraction of the Robinson sidewalk bequest that the Town of Vienna will be able to spend.  Best guess, it looks like the Town might be able to spend about 6% of that bequest money.  Plausibly, the Town will spend less than the interest that fund earns during the five years that have been allotted for the Town to spend it.

As you probably know if you’re reading this, former Town Council member Maud Robinson left a large bequest to the Town of Vienna, for the purpose of building sidewalks.

Maud Robinson passed away in March of 2019, at the age of 96.  She made a bequest to the Town of Vienna, leaving (then) roughly $7M to be used for building sidewalks.  (That has since reportedly grown to $9M).  The Town of Vienna appears to have been notified of her bequest in documents dated April 2019.   There’s a time limit of five years, for getting that money spent.

And so, if I have that all correct, the Town has until April 2024 to get those sidewalks completed.

Nothing much appears to have happened during the first year following the bequest.  The first I heard this publicly discussed by Town Council was about a year later, when plans were announced to put sidewalks along three streets (Post #532, February 25, 2020).

A year after that, I went to check on one of those streets, but no construction had begun (Post #1056, March 14, 2021).   I was surprised at the time, but then realized that the Town typically takes two years to get a sidewalk built.

That two-years-to-build-a-sidewalk estimate is important, because as I understand it, a) the Robinson trust only disburses funds once the sidewalk is actually built, and b) the funds have to be dispersed prior to mid-April 2024.  If it takes two years to get one built, that means the Town has until roughly April 2022 to get those sidewalks started.  Possibly, they could start some later, and hurry the construction a bit.  But so far, there’s not a lot of evidence that they are hurrying.

And now, in April 2021, the Town appears to have a final plan for most of what they proposed to do, to use the Robinson Estate sidewalk bequest.  This will be formally revealed at this Monday’s Town Council virtual meeting.  The documents outlining that plan are available at this Town of Vienna Granicus web page.

I went looking for one specific figure in the documents outlining the Town’s plan:  What fraction of the money from the Robinson bequest is the Town actually going to be able to spend?

I came up empty handed.  There’s nothing anywhere near so straightforward in those documents.  Near as I can tell, there isn’t even an estimate of total miles of sidewalk to be built.  There’s an exhibit labeled “Projects — status at a glance, with costs”.  Unfortunately, there are no costs listed in that document.  It’s just a list of recommended projects.

The Town’s great handicap here is that the executor for the Robinson trust insists that the money be spent literally only on the sidewalk, and nothing associated with the sidewalk (e.g., not for the curb and gutter next to the sidewalk).  So, literally just the flat thing you walk on, which is, in fact, the least expensive part of actually constructing sidewalks.

To be clear, there is no such explicit restriction in the bequest itself.  E.g., the words “curb” or “gutter” do not appear in that document, based on reporting from credible sources and an image of the key clauses of that document that was posted on Facebook.  That restriction is the interpretation of the executor, which the Town chose not to challenge legally.

If you are capable of doing long division, it’s immediately evident that this restriction is completely at odds with the size of the bequest.  In a nutshell, it makes is so that no material portion of the bequest could actually be spent.  Effectively, it makes the bequest logically inconsistent. This was obvious a year ago, see Post #532, February 2020.

“Problem 2:  The Commonwealth of Virginia says that standard 5′ ribbon sidewalk costs about $30 per linear foot.  (See reference in Post #521).  The Robinson Estate has granted the Town up to $7M to spend on sidewalks.  How many linear miles of sidewalk must the Town choose in order to use up the full $7M gift?

Reference number:  In total, Vienna has about 65 miles of publicly-maintained roadways (reference).”

In any case, per the 44 miles answer in the word problem above, it was obvious a year ago that, with this restriction, the Town was only going to be able to spend a tiny fraction of the available money.   Particularly if the Town would not spend its own money to build curb and gutter.

(By contrast, the full cost of constructing a sidewalk, including everything you need for that sidewalk, can be orders of magnitude higher than the cost of the five-foot-wide concrete ribbon that you walk on.  I did a post more than a year ago that looked at the variation in cost per foot across four projects actually undertaken in the Town of Vienna (Post #521), which ran from $100 to $666 dollars per linear foot.)

And so, the question isn’t whether or not the Town is going to be able to take full advantage of those funds.  Without challenging that restriction legally, it clearly won’t.  The only question to be answered, now that there is a plan, is just how small a fraction of the current $9M bequest is the Town actually going to be able to use, given the path it has chosen to take.  And that’s what I’m going to calculate next.

The Commonwealth of Virginia, and by reference, Fairfax County estimates that it costs about $30 per linear foot to install sidewalk in this area.  That’s just the sidewalk, not the curb, gutter, or other items incident to the sidewalk.  That’s based on Virginia Department of Transportation project-planning standards, and you can find that approximate figure in in this VDOT report regarding a couple of transit corridors in Fairfax County.

And so, if the trust will only pay for literally the sidewalk, and sidewalk costs about $30 a foot, if the Town would list the total footage, I could figure out the likely total spending from the trust.  And compare that to the $9M that was potentially available.

The Town doesn’t list the footage in the current document.  That means either a) I take the maps provided, attempt to interpret the map key, and tediously measure the road lengths, b) I extrapolate based on the number of projects, from the first three projects where I did measure road lengths, or c) I just take somebody’s word for how much sidewalk the Town is planning to build.

Here, I’m going with c), as Councilman Potter has been quoted that the Robinson trust money will allow 3.3 miles of new sidewalks.  (That’s per this source.)  I can’t quite see that, based on the planning documents cited above, but let me just run with that.

So, best guess, at best, the Town will spend about 6% of the Robinson bequest money.  That assumes that a) everything currently being discussed will be built, b) those sidewalks will all be finished before April 2024, c) the trust only pays for the sidewalk, and d) the Fairfax County estimate of $30/foot is a reasonably accurate estimate for the Town of Vienna.

This is about what I would have guessed, a year ago, when I estimated that the first three projects announced would account for about 1% of the then $7M bequest (Post #532).

Just to ballpark it, the Town’s documents list 11 projects that should get the go-ahead this Monday.  By eye, looking at the maps, the longest of those that are up for approval is DeSale St SW, which would be about 3400 feet of sidewalk, assuming new sidewalk on both sides.  (The project for Hillcrest appears longer, but is not yet approved).  If all 11 projects were as extensive as that one, that would work out to be about 7 miles of sidewalk.  Thus, a published estimate of 3.3 miles from Councilman Potter’s statement appears reasonable. Something about this whole process still strikes me as deeply, fundamentally wrong.  I guess it’s because I’ve been doing the same simple arithmetic for more than a year now, and I still come up with the same question.  If nothing else, this shows you how at odds this restriction is, with the overall size of the bequest.  For the life of me, I can’t believe that the bequest was made in full understanding of how little of it would actually be spent.

In a very real sense, the Town won’t even be able to spend the interest earned on the money, during the time it is held in trust for the Town’s use.

It’s great that the Town has a plan.  It’s good that the least-logical parts of it have been jettisoned (see Post #1096).  I’m sure that most of the people in most of the areas getting sidewalks are happy to have them.  As I have noted in earlier posts, it’s just plain odd that the only way the Town has to target sidewalks to roads that had curb-and-gutter placed decades ago.  And, oddest of all, with this restriction, the Town will be unable to spend a material portion of the money left in trust for this purpose.

Finally, this ends up being one of those cases that economists want to see avoided at all costs.  Mainly, because the money is “free”, and the Town can’t even really start to touch the principal, let alone spend the interest, there’s a real impetus to produce gold-plated sidewalks.  One thing Maud Robinson was clear about was that these sidewalks were to be done under contract.  Presumably, that was to get a fair, market-established price for the work.  It will be interesting to see, if the information is ever released, what cost per foot of sidewalk the Robinson trust ends up paying.