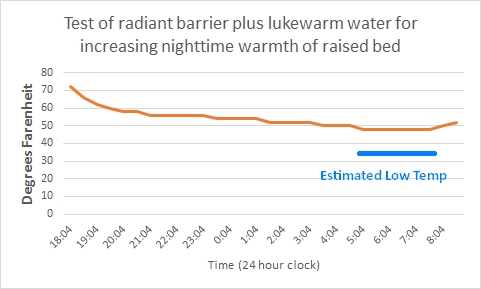 I’ve been looking into simple ways to keep to keep a raised garden bed warm at night.  So far, I’ve figured out the following:

I have now learned one two more things.

First, space blankets are too fragile to be used on a windy day.  That’s unfortunate, because they are cheap and easy to store.  But the windy conditions two days ago showed me that they just aren’t strong enough.  I had to cover the space blankets with a tarp to keep them from being shredded.

Second, actual radiant barrier, made for use in construction, works better than space blankets.  This is material sold for use in home construction.  This isn’t the the bubble-wrap-type Reflectix (r) insulation.  This is more-or-less a piece of aluminum-coated Tyvek (r), and so it’s a heavy, stiff, strong fabric.  I had a roll left over from a prior project and tried it last night, as the weather report called for near-freezing temperatures. It looks odd, but it works well.  Even though the gallon jugs of water (eight of them) started out at just 70 degrees F, that, plus radiant barrier, was able to keep this raised 4′ x 16′ raised bed about 12 degrees F above the nighttime low, as shown below.  (Unfortunately, I have to estimate that low from weather reports, as the battery failed in one of the temperature loggers.) The main downside of this material is the stiffness of it.  It’s hard to roll this stuff up.  On the plus side, it doesn’t actually cost all that much more than cheap space blankets.  I needed about $8 worth of space blankets to cover this bed.  By contrast, I needed about $11 worth of radiant barrier, based on 20 linear feet of 4′ radiant barrier and this product price listed Home Depot.

There are certainly easier-to-use alternatives.  There are reflective tarps, but those seem expensive and I’m not sure how well they work as radiant barriers.  There’s aluminized mylar film, which would be cheaper than radiant barrier, but harder to work with.

And there’s bubble-wrap-style Reflectix (r) insulation.  It looks like there are now knock-offs of that, (again, per Home Depot).  That’s a lot easier to roll up, but would cost something like $28 to cover this 4′ x 16; bed, instead of $11 for standard radiant barrier.  It would, however, provide some thermal insulation in addition to being a radiant barrier.

That said, I’m going to stop here.  This works well enough for me.  Radiant barrier is plenty tough enough, and it does what I need it to do.  With it, and a few jugs of water, I can protect this bed well down into “hard freeze” territory.   That’s purely using passive solar (water jugs) and radiant barrier, with no (e.g.) electricity used.

I might do something to make this easier to handle.  I might tape the pieces together, or I might attach them to a tarp.  (As long as either side of the radiant barrier is open to the air, it works.)

Otherwise, I’m declaring victory.  To provide 10+ degrees of additional nighttime warmth to a raised bed, it’s adequate to have one gallon jug of sun-warmed water per eight square feet, plus a radiant barrier covering.  In a pinch, space blankets will do, but they won’t last, particularly on a windy night.  It’s worth the extra few dollars to get a piece of radiant barrier meant for house construction.